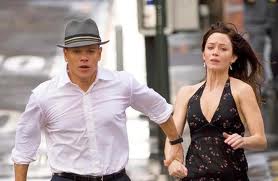 Anyone who knows me knows I have a bit of an obsession with Matt Damon. Don’t worry, it’s a healthy one centered on my appreciation for his acting skills and humble “guy next door” personality — from what I can tell. He’s
majorly famous (and handsome) yet the most down-to-earth celebrity I’ve seen in interviews.
If I ever meet him I hope I could maintain my composure and just tell him my admiration for his work. If this chance meeting happens anytime soon, I would start with sharing my intrigue about his latest project, The Adjustment Bureau. I’d love to pick his brain as to why he
chose the film, but that probably won’t happen so I’ll just go with why I like it. For starters, Damon’s performance as New York politician David Norris definitely has my vote.
The film is based on a short story by Phillip K. Dick. I have not read it,
but played out on screen it’s about some behind-the-scenes men in suits who
are able to control your life. Viewers will recognize John Slattery from Mad
Men and Anthony Mackie from The Hurt Locker.
They, The Adjustment Bureau, have the opportunity to meddle in the
characters’ fate should they stray from their path. From what I could
understand, they don’t fix to change your emotion or reason but will be on
alert if either of those will prompt something that’s not meant to be.
Luckily for me, this borderline sci-fi story is set against a romance
between David and Elise.
I don’t often check out any reviews before I see a movie, but I do make sure
to listen to The Movie Maven’s report on The Current every Friday morning.
She gives an update of what’s out in theaters for the weekend and enough of
an overview to determine what’s worth seeing without spoiling the whole
plot. I would have seen The Adjustment Bureau anyway (again
the Matt Damon obsession), but my decision was affirmed by Ms. Maven.
First, she said the film was supposed to be out last year, but it was
delayed for release in March. I guess in the movie world that’s a bad sign,
but she said it didn’t hinder The Adjustment Bureau. And, her recommendation
was for newbies to the sci-fi genre to check this one out.
That would be me. There were times I wasn’t able to make sense of the plot,
but it just carried me through the hour-and-a-half with suspense, subtle
humor and a very solid cast.
And, then the romance. Elise and David are taken in all sorts of directions
in their relationship with The Adjustment Bureau guys pulling the strings.
At one point with the Bureau in close pursuit and the decision to stay with
David on her mind, Elise shouts “What is going on?!?!”
I could definitely relate to that statement at times during The Adjustment Bureau, but for me watching movies is all about escaping to an imaginary place outside of reality for awhile this one fits perfectly into that
path.
It’s all about plans and fate, so trust me, everyone is meant to see this one.