Do you have a short attention span and want to cross some of the Oscar nominees off your list before the big show next weekend? I know I am not going to see all the best picture nominees, and frankly some of the titles are not of interest to me this year, but last night viewed a whole category of pictures in one sitting.

The Lagoon theater in Minneapolis is currently showing all the nominated live action and animated short films. Stephanie Curtis from the MPR Cube Critics recommended the animated films over the live action and they were Jesse’s top pick for our night out at the movies. I concurred with the choice, of course, and left the theater having loved every minute of it.
First off, here is the full list of the nominees:
1. Dimanche (Sunday) from Canada
2. The Fantastic Flying Books of Mr. Morris Lessmore (USA)
3. La Luna (USA)
4. A Morning Stroll (UK)
5. Wild Life (Canada)

Of those, my top choice is A Morning Stroll about a chicken out and about on a stroll in three different eras of time and the experiences that materialize as a result. A Morning Stroll presented the most humor of the nominated films shown at the Lagoon, but also mixed in just enough subtlety to counter the laughs.
It was tough to pick a second favorite short film, but I’ve narrowed it down to Dimanche for its simplicity and unique animation technique. It’s probable that The Fantastic Flying Books of Mr. Morris Lessmore will take the cake at The Oscars. It actually wasn’t my favorite but the imagery was, well, fantastic and fits the bill of what an animated film should do: take you away to a far away place where all that matters is your imagination.
Overall, all of the films did that through use of little dialogue to convey the story and plot. I think all of the films had an underlying meaning, but you don’t have to go there if you don’t want to. I suggest just taking in the art on the screen in front of you and not thinking too much about the life lessons that are likely there. I imagine the filmmakers did develop their projects from experiences in their own lives (think,
“art imitates life”) but it’s nice to be once removed from that and just appreciate what led to their brilliance and creativity from afar.
I definitely recommend checking out these five nominees at home, but there is an added bonus if you have a chance to see the series in the theater. In addition to the five top dogs, the screening included several other animated projects with the line-up that could snag a nomination if the Academy stretched the number allowed in the category. If the Best Picture subset can rise to 10, why can’t their friends on the animated side join in with that level of competition?
As I mentally prepare to craft my full Oscar predictions by next week, I am glad to be able to make an educated guess about which cartoon creation should win.
Of course, there is always the question of which picture SHOULD win, and which one will. I personally think A Morning Stroll should take the prize, but there is no doubt The Fantastic Flying Books of Mr. Morris Lessmore will.

(Similarly, think The Descendants vs. The Artist.) 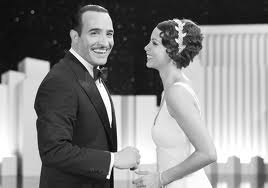 With all the buzz about The Artist before the Oscars, and its landslide wins at the Golden Globes, I had to do my due diligence and see it before the big award show is on. It’s the clear predicted winner for the Oscars, but not my personal favorite this season. I also read The Help could be the biggest spoiler (to win?) among the top films and Melancholia should have been nominated. My personal pick is The Descendants, although I haven’t seen all the nominees yet, but I can see now why The Artist cast and crew will likely be sent home with Mr. Oscar

As an homage to the silent film era, The Artist takes fans of it back to the glory days while drawing in a new audience from modern time. The film does so by slowly mixing a silent film with the style of talkies that evolved during the 1920s time frame it focuses on. At the center of the plot is George Valentin, a silent film actor who suddenly becomes washed up in the midst of talkies and the stardom of Peppy Miller, who started out as an extra.
The plot is simple and charming with the purpose to serve as a backdrop to the overall theme of the movie. As George struggles to find his place in the new world of film, and with being in existence all together, Peppy rises up in Hollywood. But she can’t escape George and their connection while making silent films, and ultimately saves him.
George also has the help of his trusty sidekick, a Jack Russell Terrier named (in real life) Uggie. Sadly, I read today that he is retiring after his appearance at the Oscars with Billy Crystal.
In my mind, Uggie definitely stole at least part of the show in The Artist.
But I digress.
Overall, the film is effective in its mission and presents a strong use of sound and emotion to convey a story as well as a slice of history. So the question remains, do I recommend the film? There are certainly movies in theaters I wanted to see more and before The Artist, but it did take me by surprise. It’s a film the viewer can get lost in and leave with a feeling of appreciation for a project with a lot of heart. Give it a try.