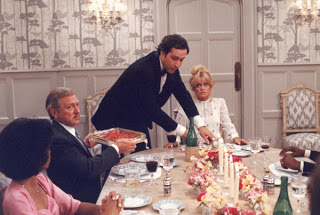 I’ve got To Rome With Love on the brain, so maybe that’s why watching Neil Simon’s Seems Like Old Times reminded me of a Woody Allen film. After thinking about it a bit, Woody Allen would not have made the same movie as Simon and director Jay Sandrich but I do think he could have conceived the same characters and story as a starting point.

Seems Like Old Times stars Goldie Hawn and Chevy Chase (pre-Fletch) as a divorced couple who reunite under some unique circumstances that turn both their worlds upside down.
As Nick Gardenia (Chase) is one minute writing at his secluded cabin in California and the next is kidnapped to help two drifters rob a bank; his ex-wife Glenda Parks (Hawn) is working as an attorney and living in a mansion with her new husband Ira (Charles Grodin), their six dogs and multiple staff.
That being the case, who else is Nick going to turn to when he escapes his kidnappers but still becomes the prime suspect in the bank robbery? Glenda. At that point in the story Glenda and Ira are hosting a swanky party to celebrate his bid for district attorney.
It’s Ira’s character who makes the story representative of Allen and the roles he often plays in his own films.
Ira is in line for a promotion and supposedly has his life in order, all the while a fugitive and his beautiful wife’s ex whose capture could lock in the district attorney job is hiding in the guest quarters.
Glenda is out of Ira’s league and Nick’s presence brings that to light. Would Ira have the confidence to show up at his ex’s house during an important party and cause an uproar? Would he serve chicken pepperoni in the passed-out butler’s tuxedo (which actually belongs to his wife’s new husband) at a dinner for the governor? If he did, Ira wouldn’t pull it off like Mr. Nick Gardenia.
Nor would any of the Alvy Singer-types Allen portrays or casts in his projects. Yet those bumbling goofs always have a beautiful woman on their arms as Glenda is to Ira.
I think the comparison between Allen and Sandrich’s take on Neil Simon’s Seems Like Old Times ends there, but not my appreciation of the film. It’s a smart and simple film and while it’s nice to associate the 1980s only with such projects, I wish more like it would come up today. Oh yeah, To Rome With Love is in theaters now.